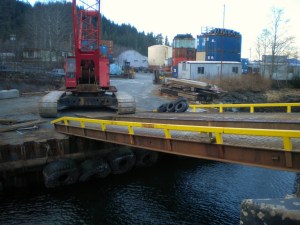 We spent the 12th working cargo in Sitka from 0700 to 1500. The weather was terrible – freezing cold and super windy, and the mud on the barge was frozen solid but the top layer was dry and dust devils were spinning all around us, filling our eyes and ears and noses with dirt. We were hacking at the mud with pickaxes to dig out lashing gear – at one point when we were lashing down a huge cargo crane, I was digging to free up a shackle when I missed the mud and hit myself square in the shin – with a pickaxe!! It hurt like a motherf*cker; I almost cried.

It felt so amazing after working cargo to wash my face and take a shower – I passed the hell out and slept like a rock until my night watch at midnight. That night we were headed south just off Baranof Island until about 0200 before we came around Cape Ommaney and then Cape Decision. The wind and rain were blowing out of the east and ice was starting to form all over the boat, covering the railings, bitts and cap rails. The next day when I woke up, there was at least 3-4 inches of ice covering the entire boat! The sunshine made the bulwarks glitter like the tiers of a giant cake. 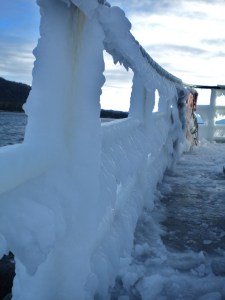