Back in July, we were tasked with moving an old steamship, the Cape Breton, out of the Ready Reserve Fleet in Suisun Bay. We headed out from Benicia early in the morning, paddling eastward as the sun came up on the last of the ships anchored in the mud.

When I was a little girl, there were nearly a hundred ships laid up in the Suisun Ready Reserve Fleet – locally known as the mothball fleet – and I would press my nose against the car window to get a better look at them any time we drove over the Benicia-Martinez bridge. Now there are fewer than a dozen; most of them have been scrapped, one by one, over the recent years. The last of the vessels there now will probably be gone within a year. There is a whole team of people whose job is to maintain those ships; I wonder what they’ll do when the fleet is gone?

Ships were tied up there since 1946, following the end of World War II. Many of them were cargo ships converted to carry supplies for the military in times of war. There were also many warships, notable among them the USS Iowa, which was flat-towed in the spring of 2012 from San Francisco Bay to Los Angeles, where she is now a floating museum in San Pedro.

In the early 2000’s, the pollution from the ships started to become a more broadly visible public issue; people didn’t like the idea of tons of paint and metals sloughing off into the water from the hulls of dozens of ships sitting in the bay, so there grew more of a push to get them gone. 50-year-old steam ships are more or less obsolete in this day and age, so unfortunately, most of these relics will end up scrapped.

We got to take a good look at the Cape Breton as we made our lines fast to assist her to Mare Island. Her riveted construction, old-fashioned cargo booms (with cables everywhere), and rounded transom were a window into a nostalgic era of shipping – one of postwar romance and adventure. There are a few steamships still in operation that are similar to the mothball fleet ships – for example the Matson ships that carry cargo between the US West Coast and Hawaii. The curving bridge wings on the forward houses of the Lihue and Mokihana are reminiscent of the futuristic architectural imaginings of the 1960’s. 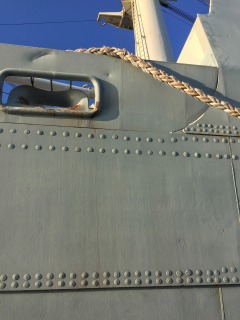 I’m also excited that Mare Island is a working shipyard again. It is another window into the past, to a time when Vallejo was a healthy, bustling town. When the Mare Island shipyard was cranking out ships in its heyday, Vallejo had a strong job market and work force. Now it has a reputation for being poor, crime-ridden, and dangerous, but I have a lot of hope that the revival of the shipyard is one step toward bringing more money into the city. The real estate market there is already showing significant gains (as people are buying homes in Vallejo since we can’t freaking afford anything else in the Bay Area anymore) and home values continue to rise steadily.

There was a feature in the Vallejo Times-Herald on the Cape Breton the day we towed her down to Mare Island. The ships are well-known in the local towns. And in 2011, a small team of photographers captured some amazing images of the “ghost ships” before the numbers started to dwindle. It’s amazing to see the condition many of the ships are in (i.e. totally unusable) and though they are a piece of history, it’s finally time for them to go.